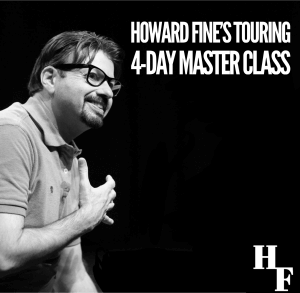 Now is your chance to study with legendary acting coach, Howard Fine, during one of the upcoming 4-Day Master Classes! For actors based outside of Los Angeles, Howard takes his award winning actor training on the road!

This workshop is an intense exploration of the award winning technique that has guided numerous actors to the awards podium and into successful careers on stage and screen. Perfect for working actors looking to brush up on the basics, or for any serious artist ready to roll up their sleeves and dive deep into a scene. Howard’s training is an industry standard in Hollywood, and this class has been featured in L.A., Sydney AUS, Melbourne AUS, Aukland NZ, Austin TX, and will be coming to the east coast beginning this December!

This is a career and life changing workshop you won’t want to miss! Space is limited to 32 participants (16 scenes), so act fast! Additional students may be accepted as non-participant auditors on a first come, first served basis depending on the venue. Class runs from 9 AM-6 PM w/ lunch break during the 4 days.

To apply, please contact info@howardfine.com for more information on a class being held near you and to secure your spot!

Due to high demand and limited space, all deposits are non-refundable, and PIF required to reserve spots.

CLICK HERE to get a sample of Howard’s teaching.

Howard Fine is an award winning Hollywood acting teacher and author known for his award winning actor training. Howard was named Best Acting Teacher in Los Angeles in a one of a kind poll of its readers, by Backstage Magazine. He currently coaches actors working at the highest levels of the industry, and teaches at both his studios in L.A. & Australia, and around the world.

Actor Chris Pine, who has starred in such films as Star Trek, Wonder Woman and A Wrinkle in Time, says “When I first met Howard he told me his job was to make the actor a self sufficient artist. His great skill is the joy he takes in watching you discover, with the tools he provides, the essence of a character. He loves actors, he loves the process and he is all about the work.”

Howard directed Michael Chiklis on Broadway in Defending the Caveman and Elizabeth Berkley Lauren, Rachel Dratch and Alley Sheedy in David Linday Abaire’s That Other Person as part of the Best of the 24 Hour Plays Off Broadway.

In addition to training and directing actors, Howard has also been contracted by the FBI to train undercover agents in the global war on terror. In his book, American Radical: Inside the World of an Undercover Muslim FBI Agent, the author Tamer El Noury states that the training he received from Howard Fine “saved my life as much as any training I got from the FBI.” These agents’ very lives depend on being believable in their undercover roles and the FBI turned to Howard Fine for his expertise.

Howard has been teaching and training actors for over 30 years at his studio, The Howard Fine Acting Studio, in Hollywood, California and at the sister school located in Melbourne Australia. His book, Fine on Acting, continues to be a best seller on Amazon and is widely considered to be a seminal book on the craft of acting.

For consideration and more information, please email headshot and resume to

Payments must be made online once student is registered. If you wish to register, please contact info@howardfine.com for access to our registration system.

We accept the following forms of payment:

All payments must be made before the start of the first class. Students may not attend class or put up work in class until payment is received. We do not sell partial courses or single classes, and we do not pro-rate class fees based on attendance, including for classes missed for any reason. No refunds or credits will be issued for classes not taken. Payments are not per-class, but rather per-course.

All enrollment and payments are handled via our website. By enrolling at our studio, you agree to the Terms & Conditions of our online student portal. Some classes require administrator approval, additional restrictions may apply. We reserve the right to refuse service to anyone, particularly and especially those who do not adhere to our payment policies and who attempt to attend class without paying.

No refunds or credits will be issued for classes not taken.